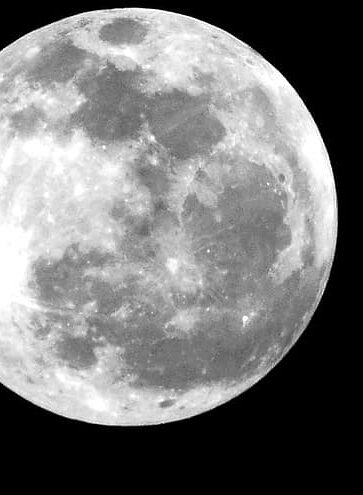 ESSIC/CISESS Scientist Hu “Tiger” Yang recently published an article in a special issue of the journal Remote Sensing titled “A Study of Lunar Microwave Radiation Based on Satellite Observations”.  The paper is also co-authored by Martin Burgdorf from the University of Hamburg in Germany.

For years, astronomy and remote sensing communities have been interested in the study of microwave radiation from the Moon.  Due to the stable geophysical properties of the Moon’s surface, microwave lunar radiation is highly predictable and can be accurately modeled given sufficient observations from reliable instruments.  In the study, Yang looks at the benefits of using International System of Unit (SI) traceable observations of the Moon.  This would allow the Moon to be used as an SI traceable calibration reference for microwave instruments to evaluate their calibration accuracies and assess their long-term calibration stabilities.  The basic idea is that during lunar intrusion events, when the Moon appears in the satellite observation field of view, the effective microwave radiance of the Moon’s disk can be derived from the receiver output counts difference between the clear space view and the space view with LI, as shown in the figure.

At ESSIC/CISESS, Yang works on NPP/JPSS ATMS calibration/validation as project investigator.  His main study field includes passive microwave radiometer calibration/validation, satellite geolocation, and satellite observation simulation. In 2010, Yang was the winner of the National Defense Science Advancement Award from China Aeronautic and Space Agency (CASA) for his outstanding contribution to the development of China’s first spaceborne microwave imager radiometer.  Yang is the member of IEEE and AMS and has published over 40 peer reviewed journals. 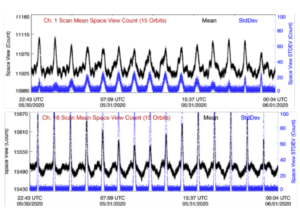 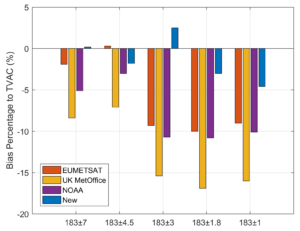