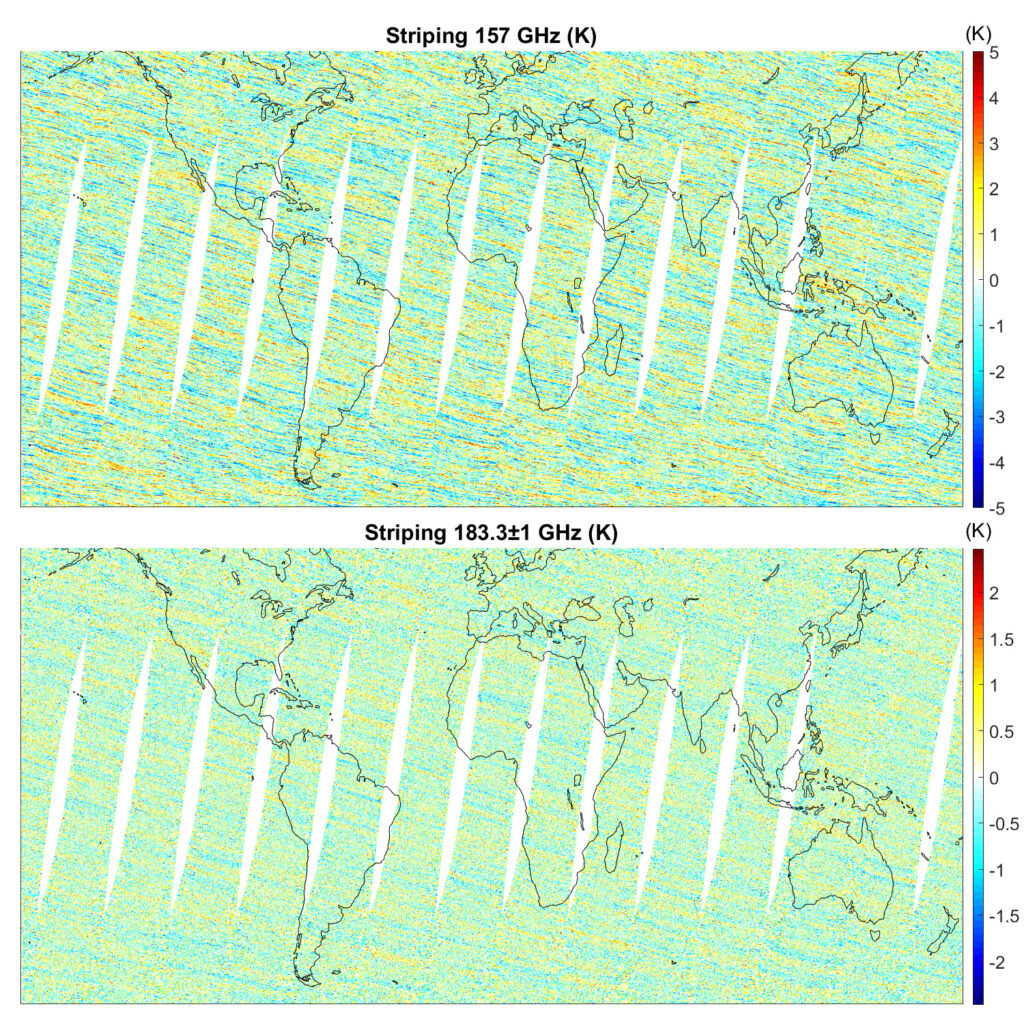 ESSIC/CISESS scientists John Xun Yang and Yalei You, as well as ESSIC scientist Rachael Kroodsma are co-authors on a new paper in IEEE Transactions on Geoscience and Remote Sensing alongside Sidharth Misra from NASA Jet Propulsion Laboratory and William Blackwell from MIT Lincoln Laboratory. Blackwell is also a two-time speaker for the ESSIC Seminar Series, the most recent of which can be viewed here.

In the study, documented in the paper titled “Quantifying and Characterizing Striping of Microwave Humidity Sounder With Observation and Simulation”, the researchers developed a set of novel algorithms for striping quantification, decomposition, characterization, and simulation. The new algorithm extracts striping from the warm-load and cold-space scenes that are relatively stable, providing insights for quantifying and understanding striping. This algorithm can be applied to other radiometers and to simulate striping for evaluating its impact on data assimilation and science products.

Yang is an Assistant Research Scientist at ESSIC/CISESS. His research areas include Earth remote sensing, microwave radiometry, hardware development, calibration, and retrievals. He has been involved with a number of NASA/NOAA satellite missions, including the Aquarius, GPM, CYGNSS, JPSS, and TROPICS. He is a senior member of IEEE and an associate editor of IEEE Journal of Selected Topics in Applied Earth Observations and Remote Sensing (JSTARS).

You is an Associate Research Scientist at ESSIC/CISESS. received his B.S. and M.S. degrees in atmospheric science from Yunnan University, Kunming, Yunnan, China, in 2005 and 2008, respectively, and the Ph.D. degree in meteorology from Florida State University, Tallahassee, FL, USA, in 2013. His research interests include passive microwave precipitation algorithm development, precipitation data set validation, and microwave instrument calibration. You has served as an Associate Editor for the Journal of Hydrometeorology and the Journal of Applied Meteorology and Climatology.

Kroodsma is an ESSIC Assistant Research Scientist and works with the Precipitation Processing System at the NASA Goddard Space Flight Center. Her research interests include microwave radiometer calibration and remote sensing of the atmosphere. As a member of the Global Precipitation Measurement (GPM) inter-calibration working group (XCAL), she works on developing inter-calibration techniques and monitoring the calibration of the microwave radiometers in the GPM constellation. She is also the instrument scientist for the Conical Scanning Millimeter-wave Imaging Radiometer (CoSMIR), which most recently flew on NASA’s ER-2 aircraft in the IMPACTS field campaign.

To access the paper, click here: “Quantifying and Characterizing Striping of Microwave Humidity Sounder With Observation and Simulation”.