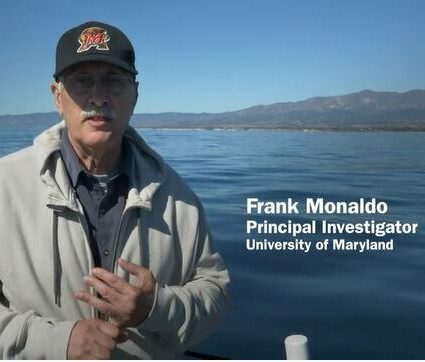 As part of a multi-year NASA grant from the Disasters Program, UMD, NASA Jet Propulsion Laboratory, NOAA, United States Coast Guard, Watermapping Ltd., Maryland Department of Agriculture, Environment Canada, and Marine Spill Response Corporation participated in an experiment to compare oil thickness measurements (both in situ and remotely) in the hopes of validating an oil thickness product. By finding the thickest oil layers, researchers can identify key zones to bring in remediation equipment and clean up the most harmful oil in the environment. ESSIC Senior Faculty Specialist Frank Monaldo is the Principal Investigator on this grant and is featured in a video that highlights this work.

In the experiment, an airplane flies off the coast of Santa Barbara, California carrying a radar called Unmanned Aerial Vehicle Synthetic Aperture Radar (UAVSAR). The radar collects an image swath of a 12-miles-wide path above the water. To validate the radar data, researchers use a drone that makes multispectral measurements that can be used to derive oil thickness as well as a sampler that can be placed in the water to directly measure oil thickness.

Frank Monaldo retired from the Johns Hopkins University Applied Physics Laboratory after 43 years where he was a principal staff physicist and the supervisor of the Ocean Remote Sensing Group. He has recently joined ESSIC at the University of Maryland. In that position, he was won grants from NASA and is also supported by NOAA. He has published extensively in the scientific literature. His current goal is to take his ocean remote sensing research and transition it to operations.