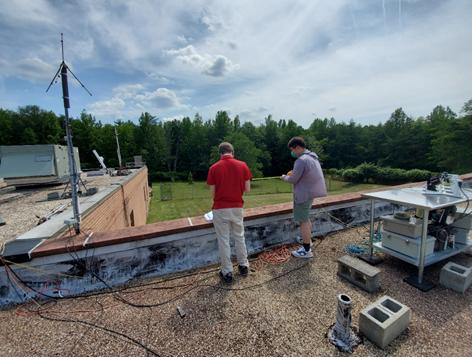 On August 6th, ESSIC/CISESS Scientists Joseph Patton and Guangyang Fang and Summer Intern Terrence Pierce visited one of their DC Lightning Mapping Array (DCLMA) detection stations on the campus of Howard University-Beltsville. The weak GPS signal for this station had been giving them trouble, so they cut out the extra length of the GPS coaxial cable and installed new connectors on both ends of the cable to reduce the signal loss, and that has resolved the problem successfully.

Joseph Patton is a meteorologist and research scientist specializing in lightning with Dr. Scott Rudlosky. He received his B.S. in Meteorology from the University of Oklahoma and his M.S. in Meteorology from Florida State University. Before joining CISESS, Joseph worked for two years as an operational meteorologist for the National Weather Service in Goodland, Kansas. With CISESS, Joseph focuses on applications and training for the Geostationary Lightning Mapper (GLM) in use with the GOES-R satellite program.

Guangyang Fang is a Visiting Assistant Research Scientist at ESSIC/CISESS. He received his M.S. in Atmospheric Science from Texas A&M University and his Ph.D. in Climate Dynamics from George Mason University. Guangyang worked as Post Doctoral Associate with ESSIC from October 2018 to February 2020, and he was rehired as Assistant Research Scientist in March 2021. Guangyang is working on DC Lightning Mapping Array (DCLMA) networks and GOES-R Geostationary Lightning Mapper (GLM) validation. His research interests also include climate predictability, air-sea interaction, global and regional climate change, and climate modeling. 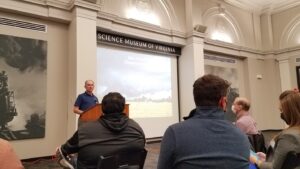