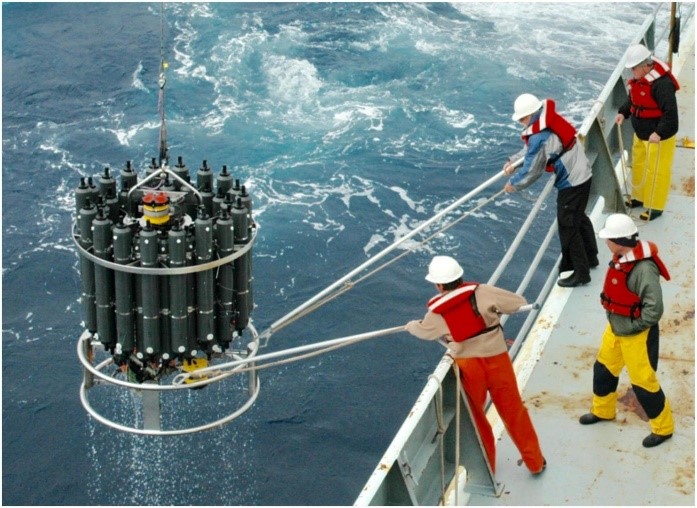 ESSIC/CISESS Scientist Li-Qing Jiang, who works on the Ocean Carbon Acidification Data System (OCADS) project at the National Center for Environmental Information (NCEI), coordinated a massive effort by the international community to develop a best practice data standard for discrete bottle-based chemical oceanographic data. The study, co-authored by ESSIC/CISESS Scientist Alex Kozyr and esteemed scientists at over 30 institutions in 10 countries, was published on January 21st in Frontiers in Marine Science.

Effective data management is paramount in oceanographic research because investigations of regional and global oceanographic processes often involve compiling cruise-based data from different laboratories and expeditions, such as the seawater collection depicted in the image below. The creation of the international data standard was motivated by feedback from OCADS users and covers column header abbreviations, quality control flags, missing value indicators, and standardized calculation of numerous parameters. This project represents a major step forward in terms of (a) bringing the subject matter expertise from the research community to the data management world, and (b) creating common data standards for the international ocean acidification (OA) research community, so as to streamline data management, quality control, and data product developments. It creates the potential for future data management automation, and the creation of a unified data access interface for OA data residing at international locations. In turn, this effort will promote the advancement of ocean biogeochemistry research on regional to global scales.

Jiang is a chemical oceanographer specializing in the study of inorganic carbon cycling and ocean acidification in coastal and global oceans. He received his Ph.D in Oceanography from the University of Georgia in 2009 and did his postdoctoral research at Yale University. Dr. Jiang has been working at NOAA’s National Centers for Environmental Information (NCEI) since 2011. He is currently the lead principal investigator of the Ocean Carbon and Acidification Data System (OCADS) project, which is partially funded by NOAA’s Ocean Acidification Program (OAP). In addition to data management, Dr. Jiang has been leading the North American coastal synthesis project. 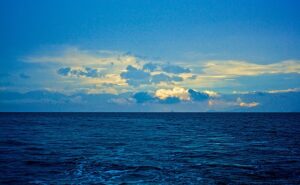 Effects of the Pandemic on Observing the Global Ocean 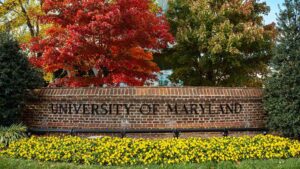