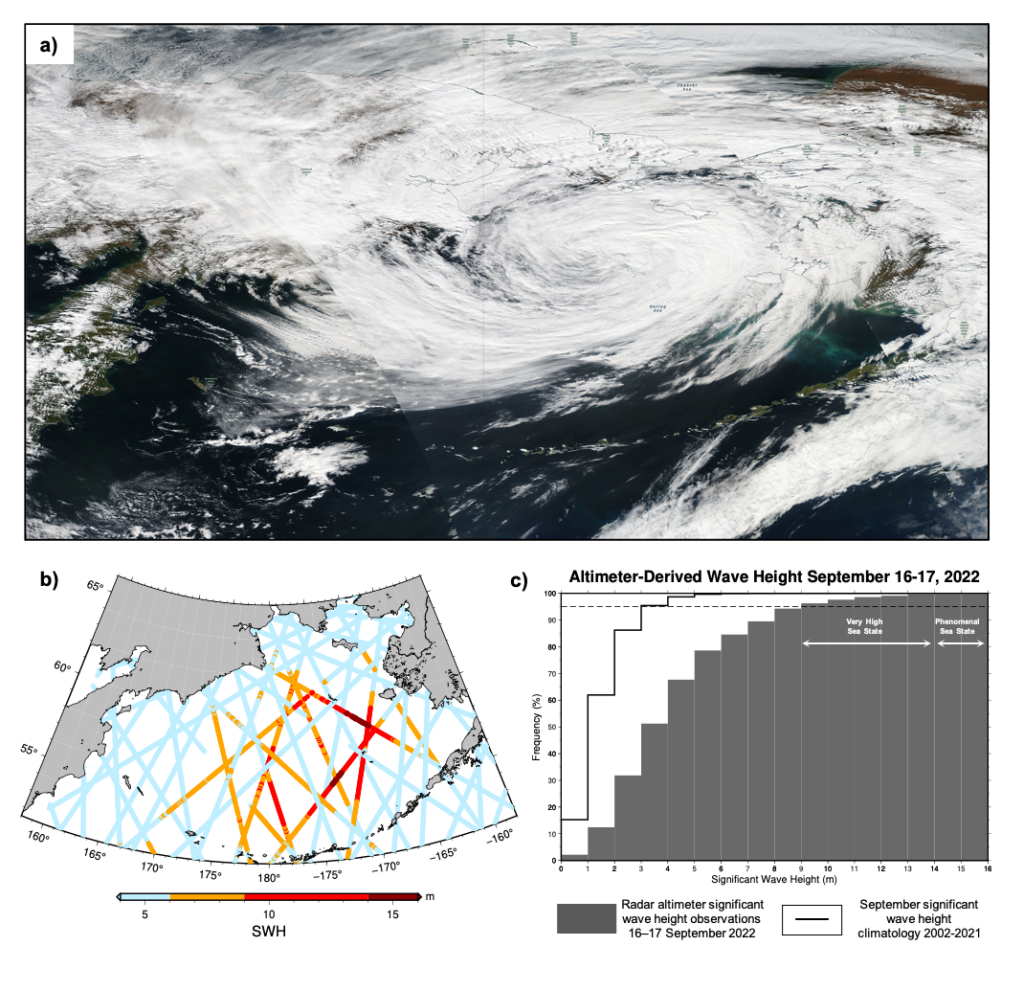 Coastal Alaska was devastated by flooding due to the remnants of Typhoon Merbok (Figure 1a) on September 17, 2022. Storm surge flooded communities along 1,000 miles (1,609 km) of Alaska’s west coast, damaging homes, submerging roads and triggering evacuations. Satellite measurements recorded 17 observations of significant wave height exceeding 14 m (46 feet) on September 16-17 2022 (Figure 1b, dark red dots). Such a sea state is defined as “phenomenal” by the World Meteorological Organization (WMO). During the 48-hour period, 5% of all satellite radar altimeter observations in the Bering Sea exceeded 9m (30 ft), defined as “very high” seas by the WMO (Figure 1c) and 19% of observations exceeded 6m (20 ft), WMO “high” seas.

Although the Bering Sea is considered one of the most treacherous seas in the world, such very high and phenomenal sea states are unusual for the month of September. ESSIC/CISESS scientists Sinead L. Farrell and Kyle Duncan are collaborating with AOSC Graduate Student Reint Fischer and John Kuhn and Eric Leuliette at the NOAA Laboratory for Satellite Altimetry on an investigation of long-term changes in the Bering Sea over the past two decades.

They have found that the roughest seas are most commonly observed in the winter months between November and February. Their analysis of satellite radar altimeter observations of significant wave height in the Bering Sea shows median wave heights in the month of September typically span 1.5 to 2.4 m. Over a 20-year period between 2002 and 2021, only 5 % of observations show significant wave height > 4 m (Figure 1c, solid black curve). Conditions in September 2022 were quite different to this, when between 16-17 September, 5 % of all observations showed waves > 9 m tall (Figure 1c, gray bars).

Farrell is an Associate Professor with the University of Maryland Departments of Geographical Sciences and Atmospheric and Oceanic Science. She is affiliated with the NOAA Cooperative Institute for Satellite Earth System Studies (CISESS) within ESSIC. She received her MSci and PhD from University College London. She is a principal investigator on the NASA ICESat-2 Science Team and a member of the Mission Advisory Group for the European Copernicus Polar Ice and Snow Topography Altimeter (CRISTAL) mission.

Kyle Duncan joined the Earth System Science Interdisciplinary Center at the University of Maryland in January 2015, and is based at the NOAA Laboratory for Satellite Altimetry, College Park, Maryland, as a Faculty Research Assistant. Kyle earned a B.S. degree in Physical Sciences from the University of Maryland in 2011 and received an M.Sci. degree in Geology from the University at Buffalo in June 2015. His main research interests include active remote sensing, laser altimetry over sea ice and ice sheets, and the impact of polar climate change on the Earth’s climate system. 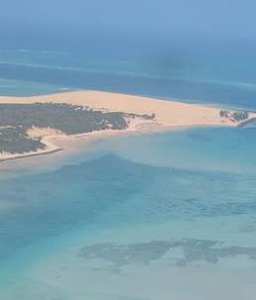 Farrell and Thomas Discuss the Hidden Talents of ICESat-2