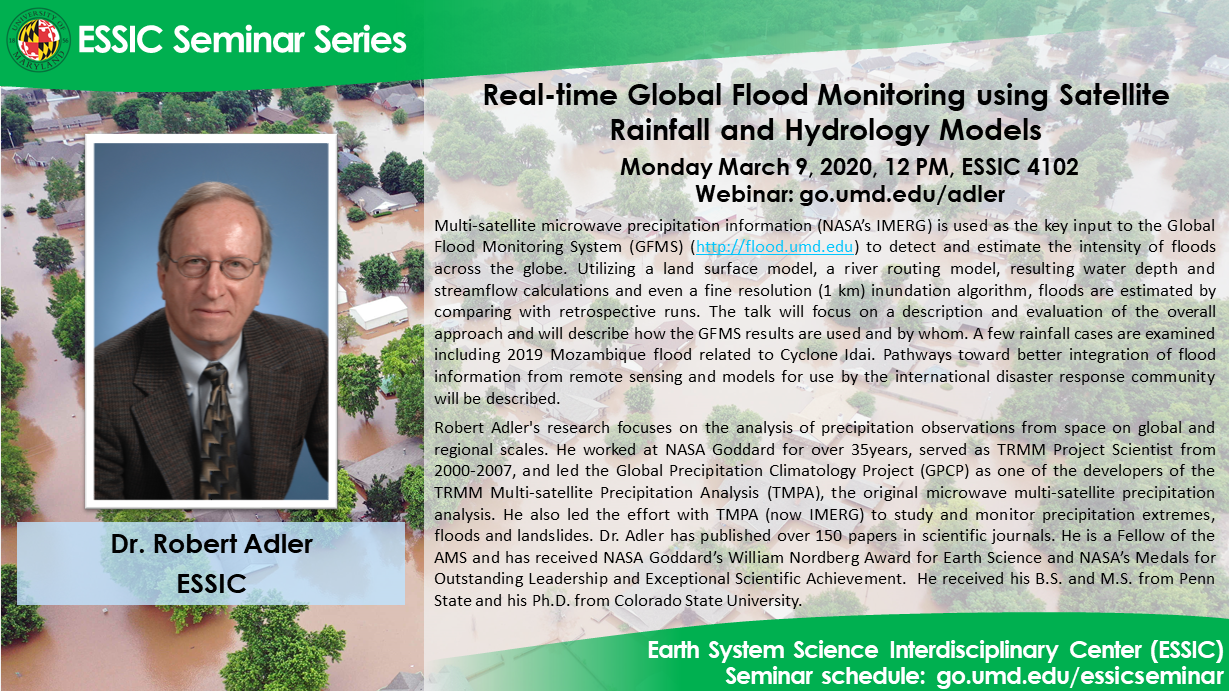 Multi-satellite microwave precipitation information (NASA’s IMERG) is used as the key input to the Global Flood Monitoring System (GFMS) (http://flood.umd.edu) to detect and estimate the intensity of floods across the globe. Utilizing a land surface model, a river routing model, resulting water depth and streamflow calculations and even a fine resolution (1 km) inundation algorithm, floods are estimated by comparing with retrospective runs. The talk will focus on a description and evaluation of the overall approach and will describe how the GFMS results are used and by whom.

The key input information, the satellite rainfall, is evaluated with gauge observations, although they are often degraded or missing during flooding in the developing countries, where the GFMS information is most useful. For this reason, rainfall for tropical cyclone cases over the U.S. are also examined. The flooding results will focus on the 2019 Mozambique flood related to Cyclone Idai and inundation calculations from GFMS will be compared to inundation maps from Synthetic Aperture Radar (SAR) and other remote sensing estimates. Pathways toward better integration of flood information from remote sensing and models for use by the international disaster response community will be described.

Robert Adler’s research focuses on the analysis of precipitation observations from space on global and regional scales, focusing on precipitation variations on inter-annual to climate-trend scales. He served as NASA’s Tropical Rainfall Measuring Mission (TRMM) Project Scientist from 2000-2007, in addition to holding other positions during a 35-year career at NASA Goddard. He also heads the Global Precipitation Climatology Project (GPCP) and is one of the developers of the TRMM Multi-satellite Precipitation Analysis (TMPA), the original microwave multi-satellite precipitation analysis. He also led the effort to apply analyses such as the TMPA (and now NASA’s IMERG product) to study and monitor precipitation extremes, floods and landslides on a global scale. Dr. Adler has published over 150 papers in scientific journals on these topics. He is a Fellow of the AMS and has received NASA Goddard’s William Nordberg Award for Earth Science and NASA’s Medals for Outstanding Leadership and Exceptional Scientific Achievement. He received his B.S. and M.S. from Penn State and his Ph.D. from Colorado State University.