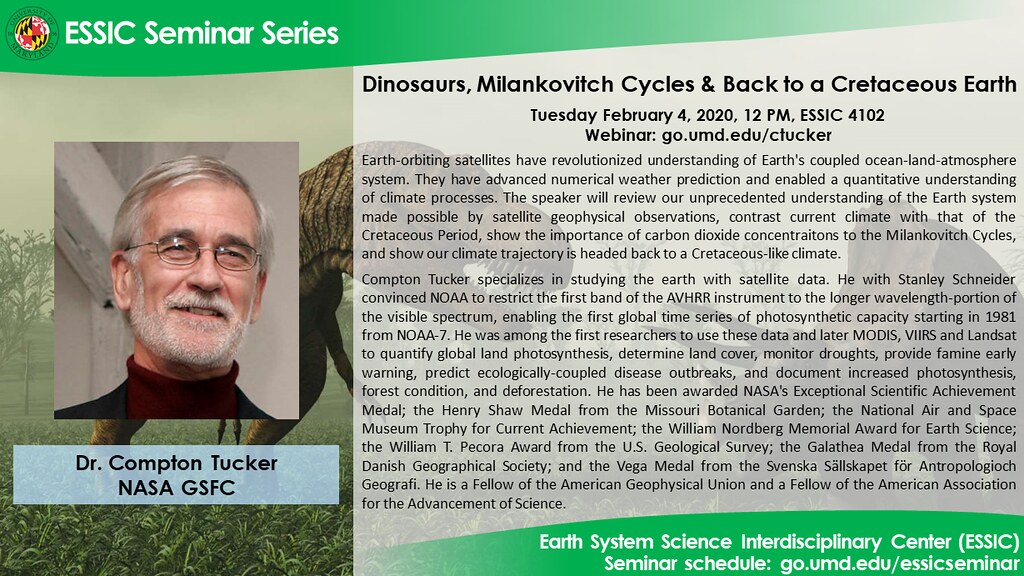 Dinosaurs, Milankovitch Cycles & Back to a Cretaceous Earth

Earth-orbiting satellites have revolutionized understanding of Earth’s coupled ocean-land-atmosphere system. They have advanced numerical weather prediction and enabled a quantitative understanding of climate processes. The speaker will review our unprecedented understanding of the Earth system made possible by satellite geophysical observations, contrast current climate with that of the Cretaceous Period, show the importance of carbon dioxide concentraitons to the Milankovitch Cycles, and show our climate trajectory is headed back to a Cretaceous-like climate.

Compton Tucker specializes in studying the earth with satellite data and had the good fortune to come to GSFC as a postdoctoral fellow in late 1975, following completion of his PhD degree at Colorado State University. As a postdoctoral fellow, using his PhD research, he with Stanley Schneider of NOAA, was able to convince NOAA to restrict the first band of the AVHRR instrument to the longer wavelength-portion of the visible spectrum. This enabled the first global time series of photosynthetic capacity starting in 1981 from NOAA-7. Using these coarse-resolution satellite data time series, he was among the first researchers to use these data to quantify global land photosynthesis, determine land cover, monitor droughts, provide famine early warning, predict ecologically-coupled disease outbreaks, and document increased photosynthesis at higher northern latitudes resulting from warmer temperatures. These observation capabilities have been extended and substantially improved by the MODIS instruments and by the VIIRS instruments on JPSS. He has also used large quantities of Landsat data to study forest condition, deforestation, and forest fragmentation in temperate, subtropical, and tropical forests; and has also studied tropical glaciers in the Andes and temperate glaciers in Asia Minor with Landsat data. He has extensive experience conducting geophysical archaeological surveys at Troy, Granicus, and Gordion in Turkey for NASA’s Space Archaeology Program.

He has been awarded NASA’s Exceptional Scientific Achievement Medal; the Henry Shaw Medal from the Missouri Botanical Garden; the National Air and Space Museum Trophy for Current Achievement; the William Nordberg Memorial Award for Earth Science; the William T. Pecora Award from the U.S. Geological Survey; the Galathea Medal from the Royal Danish Geographical Society; and the Vega Medal from the Svenska Sällskapet för Antropologioch Geografi. He is a Fellow of the American Geophysical Union and a Fellow of the American Association for the Advancement of Science; an adjunct professor with the Univ. of Maryland and a consulting scholar with the Univ. of Pennsylvania’s Museum of Archaeology and Anthropology; and has published >190 journal articles that have been cited 30,000 times according to the Web of Science and 60,000 according to Google Scholar as of January 2020.