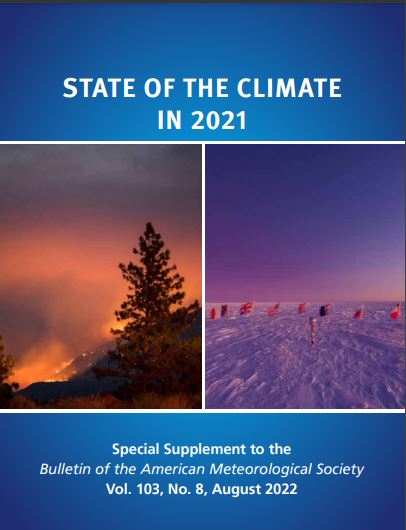 Several ESSIC/CISESS scientists have contributed to State of the Climate, the annual peer-reviewed summary of the global climate published by the American Meteorological Society. The recently-released State of the Climate in 2021 is the 32nd issue and features six chapters authored by dozens of international scientists. ESSIC/CISESS scientists Bob Adler, Jeannette Wild, Alexey Mishonov, Chelsea Parker, and Sinead Farrell contributed to the chapters “Global Climate”, “Global Ocean”, and “The Arctic”.

In the “Global Climate” chapter, Adler and Wild contributed to the subsections on Precipitation and Stratospheric Ozone respectively.

In the “Stratospheric Ozone” chapter, Wild contributed one of the 40 year datasets that monitors the decline and emerging recovery of global stratospheric ozone.  The chapter states  that in 2021, above-average total ozone levels were observed in the outer tropical/subtropical region, while at mid-latitudes, total ozone was at the lower range of values from the previous 2 decades. The Southern Hemisphere extratropical lower stratospheric ozone was close to the lowest values seen in the last decade but higher than in 2020. The lower values are related to the above-average size of the Antarctic ozone hole in 2020 and 2021.

In the “Global Ocean” chapter, Mishonov contributed to a section on “Ocean Heat Content”. Because of greenhouse gasses in the atmosphere, the oceans have been warming for decades, storing about 91% of the energy gained by the Earth’s climate system from 1971 to 2018. Ocean thermal expansion from warming accounted for about 50% of the increase in global average sea level during this same period. The report discusses patterns in the warming across the global oceans, as well as seasonal anomalies.

In “The Arctic”, Parker contributed to the section on “Surface air temperature”. Increasing regional air temperatures are the fundamental indicator of Arctic climate change. With respect to the 1900–2021 historical period, 2021 ranked as the 13th-warmest year on record but coolest year since 2013. The Arctic experienced its fourth-warmest spring (April–June), which contributed substantially to the annual temperature anomaly. The year 2021 was marked by near-normal temperatures over the central Arctic with large deviations over the subarctic continents in response to jet stream variability. Increased precipitation and greater probabilities of rain at the expense of snow are impacts of a warming Arctic. In 2021, total precipitation was modestly higher than the 1991-2020 climatology, but on average consisted of a considerably lower percentage of snowfall, relative to the 30-year average. Winter, summer, and autumn were characterized by anomalously low snowfall and high rainfall, while spring had markedly more snowfall and total precipitation.

Farrell contributed to the section, “Sea ice”. Overall, 2021 continued to reveal the profound changes underway in the Arctic sea ice system. Arctic-wide, the September 2021 total sea ice extent was 23.2% lower than the 1981–2010 average and the 12th-lowest September extent on record. The 15 lowest September extents in the satellite record have all occurred in the last 15 years (2007–21). The amount of the thickest multiyear ice remaining in the Arctic was the second lowest on record (above only 2012). In the 37 years since ice-age records began in 1985, the Arctic has changed from a region dominated by thicker multiyear sea ice to one where thinner first-year sea ice prevails.

Adler is a Senior Research Scientist with the Earth System Science Interdisciplinary Center (ESSIC) at the University of Maryland, College Park. He received his B.S. and M.S. from The Pennsylvania State University in 1965 and 1967 and his Ph.D. from Colorado State University in 1974. He has received the NASA Goddard William Nordberg Award for Earth Science in 2007, the NASA Outstanding Leadership Medal in 2002 and the NASA Exceptional Scientific Achievement Medal in 1989. He is also a Fellow of the American Meteorological Society. Adler’s research focuses on the analysis of precipitation observations from space on global and regional scales using Tropical Rainfall Measurement Mission (TRMM) and Global Precipitation Measurement (GPM) mission data along with data from other satellites.

Wild is a Senior Faculty Specialist at Earth System Science Interdisciplinary Center (ESSIC) at the University of Maryland, College Park.  She received a BA at Towson State University, and an MS and PhD at the University of Maryland (Physics).  She has studied stratospheric composition for the past 30 years for NOAA, has developed a cohesive 40 year ozone dataset to monitor the recovery of the ozone layer, and is the database manager for the Network for the Detection of Atmospheric Composition Change (NDACC).

Parker is an Assistant Research Scientist at the Earth System Science Interdisciplinary Center (ESSIC) at the University of Maryland, College Park and NASA Goddard Space Flight Center. She received her BSc from the University of Bristol, UK and her MS and PhD from Brown University. Parker works on characterizing and understanding sea ice – ocean – atmosphere interactions in a changing climate. Her research focuses on improving our understanding of the polar atmosphere and extreme weather events and the representation of these in models.

Farrell is an Associate Professor with the University of Maryland Departments of Geographical Sciences and Atmospheric and Oceanic Science. She is affiliated with the NOAA Cooperative Institute for Satellite Earth System Studies (CISESS) within ESSIC. She received her MSci and PhD from University College London. She is a principal investigator on the NASA ICESat-2 Science Team and a member of the Mission Advisory Group for the European Copernicus Polar Ice and Snow Topography Altimeter (CRISTAL) mission.  .