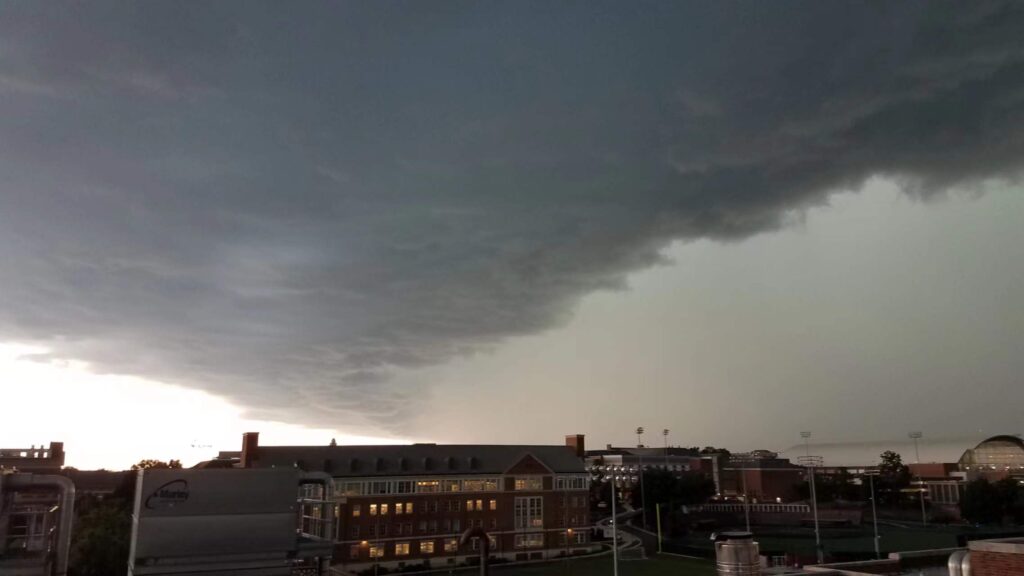 On Tuesday, July 12, the College Park area was ravaged by three storm complexes fueled by the influx of hot and humid air and powered by strong high-altitude winds. The storms brought down countless trees and caused thousands of people to lose power.

The storm that caused the most damage is known as a long-track bow echo, a fast-traveling (~40-50mph) storm that is energized by downdraft currents. The bow echo originated over the West Virginia Panhandle region early Tuesday afternoon and it tracked roughly due east all the way to the Delaware beaches. It generated wind damage along its entire path, but the system appears to have “pulsed up” in intensity as it moved east from DC into the College Park/Hyattsville/Greenbelt area.

Credit: Daile Zhang. Keep scrolling for more of her photos and videos.

“Based on my own speculation, that intensification could have resulted from a combination of the storm passing over the DC urban heat island (where it ingested hotter, more buoyant air with higher low-level CAPE that acts as “fuel” for the updrafts) and a southward-moving outflow boundary that appears to have collided with the bow echo near or just north of College Park,” Miller said.

“The outflow boundary was kicked off by another severe bow echo that moved through Northern Maryland around the same time; it could have further enhanced the bow echo updafts locally by increasing low-level convergence. Even though the damage itself resulted from downdraft out ahead of the storm, a stronger thunderstorm updraft core typically results in stronger downdrafts after a short time delay. Essentially, due to conservation of mass, what goes up must come back down.”

Miller notes that this bow echo was structurally similar to the June 2012 derecho, except it was more compact both in north-south extent and path length. Derechos by definition must have a wind damage swath length that exceeds 400 miles. But the bow echo’s peak winds rivaled the 2012 derecho with peak winds in College Park estimated at 80-90 mph by the National Weather Service. Like the 2012 derecho, the bow echo developed quickly into a bow-shaped forward moving thunderstorm cluster thanks to ample hot and humid low-level air and just enough vertical wind shear (wind speeds increasing with height in the atmosphere) due to a passing upper-level disturbance. The wind shear helped “tilt” the thunderstorms forward as they developed in West Virginia such that unlike ordinary summer “pop-up” thunderstorms, they would not quickly collapse from their downdrafts choking off their warm moist updraft air supply from below.

As the bow echo matured, the downdrafts out ahead of the individual storm cells making up the bow coalesced into a larger, combined downdraft. And in addition, the combined downdraft was able to draw drier air down from the mid-level atmosphere behind the storm, and this drier air likely further enhanced evaporation within the bow echo’s downdraft, further accelerating these winds.

Like a plow, the combined downdraft scooped up warm moist low-level air and forced it upward and backward toward the storm’s rear, feeding the bow echo’s updraft core. Water vapor condensed into rain as it ascended through the updraft, and the rain-cooled air immediately below the updraft core created a forward-propagating low-level “cold pool” that helped maintain the storm’s fast forward motion.

ESSIC Lightning Scientist Daile Zhang was on campus checking on her cameras and instruments when the worst of the storm hit and the power went out. Below are photos of damage she saw as she walked three miles back to her home.

Zhang, whose research is focused on evaluating and assessing space-based lightning sensors, also used her equipment to capture several time lapse videos. One is displayed at the top of the article, the other two can be viewed below.

Thank you to Will Miller for commentary on this storm, and to Daile Zhang for her pictures and videos!