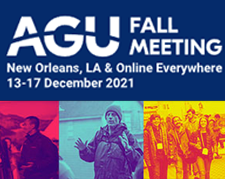 Veljko Petkovic was the Primary Convener and chaired two sessions on “Precipitation through the Eyes of Machine Learning and Advanced Statistics: Remote Sensing, Uncertainties, and Variability.” He also chaired a session on “Commercial Earth Observation and NOAA’s Low-Earth Orbiting Satellite Data for Research and Applications.”

Melanie Abecassis held a Virtual Town Hall Meeting on Satellite Data for Ocean and Coastal Science and Applications: Products, Tools and Access Services Through NOAA alongside with Veronica Lance and Michael Soracco. Abecassis also gave a Tutorial on Ocean Satellite Data Products and Using ERDDAP and R or Python to Access and Work with Satellite Data with Cara Wilson and Dale Robinson.

We had a large number of posters. Here are a few highlights: