The Mekong’s floodplains are a global biodiversity hotspot sustaining one of the world’s largest inland fisheries. However, two decades of hydropower developments have altered the river discharge and impacted the water available to the floodplains. In particular, the flood pulse — the principal driving force of healthy floodplains — is getting shorter and weaker.

A team of scientists including University of Maryland Earth System Interdisciplinary Center (ESSIC) Scientist Kamal Chowdhury as well as collaborators from the Singapore University of Technology and Design (SUTD) and the University of South Florida has shown that there are potential remedies to this situation. Coordinating the decisions made by hydropower producers could help mitigate the impact of dams on the flood pulse (refer to figure below).

Their findings, titled ‘Opportunities to curb hydrological alterations via dam re-operation in the Mekong, were published in Nature Sustainability. 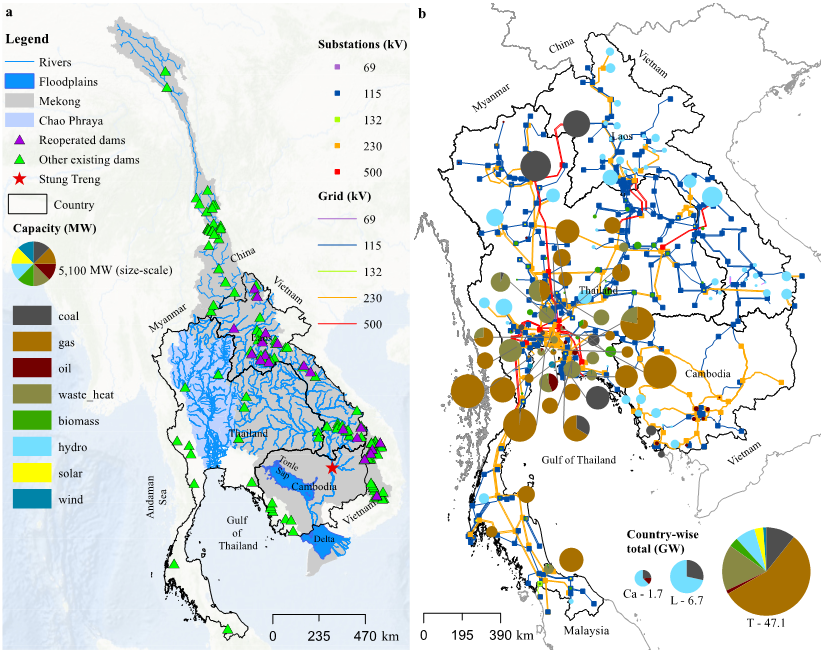 Building on existing high resolution mathematical models of all dams in the Mekong basin, the research team demonstrated that coordinating hydropower production plans across all dams could help maintain the current power production levels while improving the quality of the flood pulse. This could possibly lead to improved hydropower revenues while restoring key components of hydrological variability.

“Hydropower can play an important role in transition to low-carbon emissions in many parts of the world. However, the future development and operations of hydropower systems will increasingly require adaptive strategies to minimize their socio-ecological impacts,” said Chowdhury, a former SUTD postdoc, “Our method and findings will enhance such understandings for more sustainable development and operations of the hydropower systems globally.”

“The explanation behind these results lies in cooperation,” shared Stefano Galelli, Principal Investigator from SUTD. “Dam release decisions and production plans are typically implemented on a project-by-project basis. Coordinating these decisions across the dozens of dams within the basin enables the Mekong’s massive storage capacity to serve two purposes at the same time – power supply and ecosystem services.”

The annual cycle of healthy tropical floodplains is characterized by a strong flood pulse during the summer monsoon and a prolonged dry period. Both wet and dry periods are important to sustain ecosystems. By altering this natural variability, hydropower dams have strong impacts on the environment.

The research team has shown that several aspects of this natural variability could be restored. The duration of the flood pulse, for instance, has been getting shorter and shorter, but it is indeed possible to make it longer. The same applies to many other elements of river discharge that are known to control fish growth.

“All these findings are particularly encouraging – changing hydropower production plans does not require any structural intervention, so these plans could be virtually implemented at no cost, as long as the Lower Mekong countries were to agree on them. It is also worth noting that better results would be achieved if all countries, including China, were to coordinate their efforts,” said Galelli.

“This study shows that there are real win-win opportunities for the Mekong. There does not have to be a trade-off between what is good for the environment and what is good for energy generation. The key to all of this is coordination,” says Mauricio Arias, Assistant Professor at the University of South Florida.

“As the plans for building a joint power grid—the ASEAN power grid—unfold, more and more hydropower will be traded among countries, making these findings especially beneficial to the countries in Southeast Asia. However, discovering ways to support this trade without harming the environment is key to our ongoing sustainability efforts,” added Galelli.