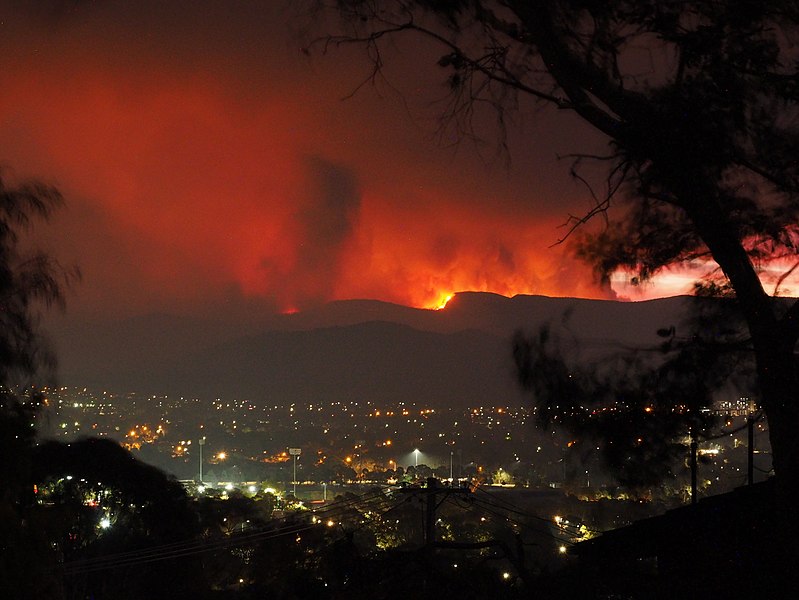 A UMD ­­alum and professor co-authored a paper about the reduction in the thickness of Earth’s protective ozone layer that followed the Australian wildfires.

The 2019-2020 wildfires in southeastern Australia killed at least 33 people and more than 1 billion animals, and their long-term environmental effects are still being studied. Researchers agree that these wildfires thinned the Earth’s ozone layer, but how exactly they did so is still a matter of some debate. Following their novel research into the effects of the Australian wildfires on the ozone layer, two University of Maryland-affiliated researchers set out to explain the mechanisms responsible for these atmospheric impacts. University of Maryland alumna Laura McBride (Ph.D ’22, chemistry) and Ross Salawitch, a professor at UMD’s Earth System Science Interdisciplinary Center (ESSIC), as well as the Departments of Atmospheric & Oceanic Science and Chemistry & Biochemistry,  published their perspective in Science on Nov. 24, 2022.

“The Australian wildfires that occurred in late 2019 and early 2020 were extraordinary events, in terms of the amount of damage that occurred in Australia and the large pyro-cumulonimbus clouds that injected smoke into the stratosphere,” said McBride, who is now an assistant professor of chemistry and biochemistry at Albright College. “Understanding the effect of the wildfires on stratospheric ozone is at an early stage. This article explores the various mechanisms initiated by the wildfires that thinned the ozone layer, and suggests several methods to analyze the contribution of dynamic and chemical mechanisms to the reduction in stratospheric ozone.”

Although the Australian wildfires in 2019 and 2020 were observed to thin the stratospheric ozone layer, the researchers say that recent studies have attempted to determine whether atmospheric dynamic or chemical mechanisms initiated by the fires have caused the ozone thinning.

“The thickness of the ozone layer thinned appreciably over mid-latitudes of the Southern Hemisphere after smoke from the Australian wildfires reached the stratosphere”, Salawitch said. “Observations obtained by the NASA Microwave Limb Sounder instrument onboard the Aura satellite show a large increase in the abundance of chlorine monoxide following these wildfires, by a chemical process that is not yet understood. The vast majority of chlorine in today’s stratosphere results from decades of prior use and emission of chlorofluorocarbons and other ozone-depleting substances.”

Salawitch explained that stratospheric chlorine is on the decline thanks to an international treaty called the Montreal Protocol, but it could take decades before it returns to a natural background level.

“These NASA satellite observations serve as a reminder that the thickness of the ozone layer can be threatened by the injection of suspended particulate matter (aerosols) into the stratosphere, either by wildfires, volcanoes or perhaps deliberate injection of aerosols to slow the rate of global warming,” Salawitch said.

“Improved understanding of the effect of massive wildfires on the ozone layer is essential because climate change is expected to increase the frequency and severity of wildfires,” McBride said.

McBride and Salawitch began their ongoing research into the Australian wildfires at UMD, while Salawitch was McBride’s advisor for her doctorate in chemistry. Recognizing the pair’s research conducted on the effect of humans and natural phenomena on the stratospheric ozone layer, the researchers were asked to write a Science Perspective article. A former NASA Jet Propulsion Laboratory research scientist, Salawitch joined UMD in 2007. McBride joined the Albright College faculty in 2022.

ESSIC is a joint center of the University of Maryland and NASA‘s Goddard Space Flight Center that supports research, teaching and career training in Earth system science. ESSIC also administers the Cooperative Institute for Satellite Earth System Studies (CISESS), a joint center with NOAA’s NCEP and NESDIS that conducts satellite research focused on weather and water forecasting models and predictions. By fostering close integration within the university community and among federal partners at NASA and NOAA, ESSIC serves as a unique collaboration hub within the national Earth system science research community.