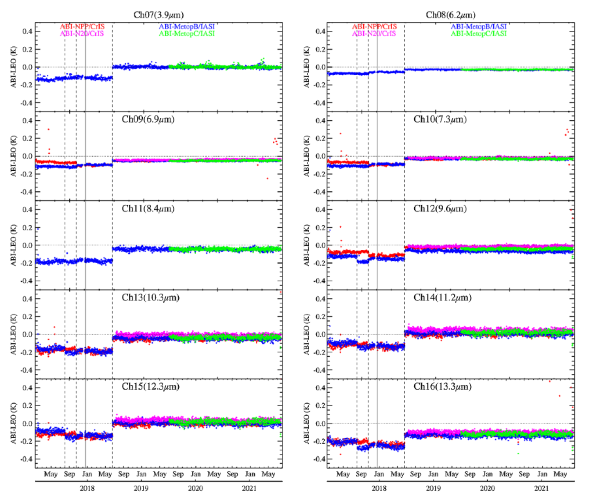 Radiometric calibration refers to the ability to convert the digital numbers recorded by satellite imaging systems into physical units. The researchers examined the radiometric calibration accuracy and stability of GOES-16 ABI IR radiance since its first light in January 2017, including the effects of two major updates of the GOES-R Ground Segment processing for the IR channels in October 2017, and June 2018. Using measurements by multiple hyperspectral radiometers from low Earth orbit satellites as references, they found that the calibrated ABI IR radiance is accurate within 0.13 K for channel 16 (13.3 μm), within 0.06 K for channel 12 (9.6 μm), and within 0.05 K for the other IR channels. This is an order of magnitude better than the requirement of 1 K.  The June 2018 upgrade, while significantly reducing bias, did create a discontinuity in the time series of brightness temperatures, as shown in the figure below:

However, since June 2018, the radiometric calibration of GOES-16 ABI IR channels has been temporally stable, spatially uniform within the ABI full-disk field of view, absent of diurnal and seasonal variations, and invariant within various timelines. Other than short term disruptions as noted in the Calibration Event Log, GOES-16 ABI IR Level 1b products since June 19, 2018, is a reliable reference for satellite intercomparison or intercalibration studies.

Fangfang Yu is an associate research scientist at ESSIC/CISESS.  She has been supporting and working on the calibration and validation of NOAA Advanced Very High-Resolution Radiometer (AVHRR) and GOES weather instruments since 2005.

Dr. Hyelim Yoo received her MS/PhD in Meteorology in Atmospheric and Oceanic Sciences from the University of Maryland, College Park in 2012. Her research interests include remote sensing, model evaluation, and satellite sensor calibration/validation.

Xi Shao is an associate research scientist at ESSIC/CISESS and Department of Astronomy of University of Maryland. He supports radiometric calibration and validation work for Suomi-NPP and NOAA-20 Visible Infrared Imaging Radiometer Suite (VIIRS) instrument and METimage on EPS-SG. 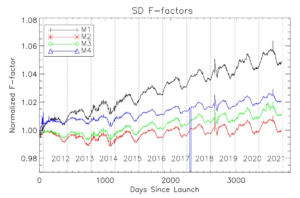 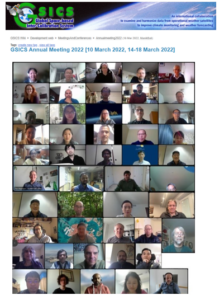